This species is the sole member of its genus. It was described from the male caste and the only known specimens were collected in Wai Lima, Lampongs, Sumatra. Its original description did not place this taxon in the Formicidae. It was transferred there by Petersen (1968) and this was confirmed by Boudinet (2015). Brues (1925) had this to say in the introduction to the description: The strange Hymenopteron described below was included among some insects collected in southern Sumatra by H. Karny and H. C. Siebers. Although I have been unable to determine its systematic relationships with any degree of satisfaction, the insect presents such striking characters that it will be very easily recognizable by anyone who may have opportunity to study its habits or to discover the other sex.

A monotypic genus, this species can be diagnosed on the basis of its unique generic characters, as described by Petersen (1968): Scyphodon should no doubt be retained as a separate genus within the Leptanillinae, characterized mainly by three apomorphic features: 1) the large paddle-shaped mandibles, 2) the long apparently fourth segment of the abdomen, which I consider to represent the fused segments 4 and 5 of the abdomen, and 3) the unique genital structure. The mandibles and the genitalia are quite unique among the Hymenoptera.

Petersen (1968) - This peculiar hymenopteron was described by Charles T. Brues in 1925 on the basis of two specimens from Sumatra.

As Brues himself said, he was unable to determine the systematic position of the species with any degree of satisfaction, and the well-known hymenopterologists Rohwer and Fagan, whom he consulted, were also unable to solve the question; all three could not even definitely determine the sex of the specimen. As far as can be judged from the short and somewhat unconvincing discussion in his paper, Brues thought that his striking species would find its place in the Bethyloidea or Proctotrupoidea or perhaps in a family of its own. (Surprisingly enough, Brues at first found a position near Braconidae reasonable).

The systematic position of Scyphodon has apparently not been discussed since the original description, though Brues himself probably indulged in some reflections on the question when, as editor of “Psyche,” he processed the paper by G. C. & E. W. Wheeler (1930) on the leptanilline ant species Phaulomyrma javana. Although there are some striking differences between the mandibles and terminalia of Scyphodon and Phaulomyrma it is clear that they are related in such a way that Brues could have transferred his species to the Formicidae, with the male-based species then placed in the subfamily Leptanillinae. This transfer is hereby formally made, on the basis of the description and figures by Brues, and a redescription may be presented later if the types are found; (they are not in the Museum of Comparative Zoology, Cambridge, according to Dr. Howard E. Evans, and Dr. David R. Smith has been unable to find them in the U.S. National Museum, Washington; Dr. M. A. Lieftinck, Leiden, informs me that the collectors very likely gave the specimens to Brues).

Scyphodon should no doubt be retained as a separate genus within the Leptanillinae, characterized mainly by three apomorphic features: 1) the large paddle-shaped mandibles, 2) the long apparently fourth segment of the abdomen, which I consider to represent the fused segments 4 and 5 of the abdomen, and 3) the unique genital structure. The mandibles and the genitalia are quite unique among the Hymenoptera.

It is impossible to interpret the genital structure with confidence from the description and figures of Brues (reproduced in figs. 15A, C, D). According to him the genitalia proper constitute the tubular piece with the large oval aperture anterior to the acutely pointed tip. This tube is supported by, and fused to, the long sternum 9. Such a fusion of the genitalia and the hypopygium would be most unusual and it seems unlikely that it has actually taken place. I hazard the guess that the terminal structure of Scyphodon is somewhat like that of Noonilla as described above, and therefore the dorsal tube is interpreted as the aedeagus, with a dorsal, oval, phallotreme as in Noonilla. The ventral supporting sclerite is interpreted as a modification of the proximal shaft of the genital organ, which in Noonilla is composed of the strongly reduced gonocoxites and the volsellar plates, and the pair of longitudinal thickenings near the apex (fig. 15C) may be homologous with volsellar digiti. Sternum 9 is apparently strongly reduced, as is tergite 9 (+10). However, as long as the actual specimens cannot be studied this interpretation of these peculiar genitalia is mere guess-work.

The wing structure and venation of Scyphodon are closest to Noonilla (fig. 6), but in other general characters the species is more similar to the Leptanilla-Phaulomyrma complex, due especially to the horizontal head and laterally compressed thorax.

It is quite understandable that Brues did not consider Scyphodon anomalum to be an ant. This species is less ant-like than e.g. Leptanilla palauensis (Smith, 1925), and Dr. Robert W. Taylor (i. l.) informs me from his experience working with palauensis in 1964, that “though Drs. Evans, Burks and Krombein all felt that Smith's palauensis was definitely an ant; Brown, Wilson and myself, as ant specialists were, at least initially, somewhat dubious.” Dr. Taylor now considers that placement of these species, and the others discussed here, in the subfamily Leptanillinae is acceptable, but emphasises the need for collection of such males in association with workers or queens before the assignment are conclusively proved. 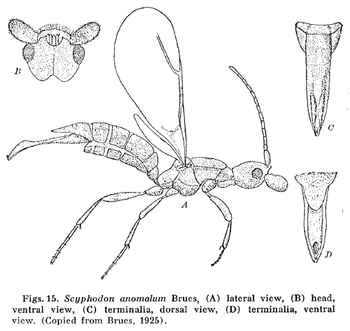 From the description it is evident that Scyphodon is quite unique in the structure of two organs, the mandibles and prolonged hypopygial organ, either one of which will serve readily to distinguish it from any other known genus of Hymenoptera.

The one-jointed trochanters at once exclude it from the Braconidae or any of the related families in which it might otherwise perhaps find a place. It must then, on the basis of the long prothorax which extends backwards to the regulae, be placed in the somewhat heterogeneous series comprising the superfamily Vespoidea, or in the Serphoidea. Here it is probably most similar to certain Bethylidae although there are several characters utterly at variance with any of the genera hitherto placed in this family. In the first place, the hind wings are very small, narrow at the base, and lack entirely the anal lobe so characteristic of this group while the short pronotum, long mesonotum and small sloping propodeum find no counterpart in the genera Teferred to the Bethylidae. The hypopygial organ seems to be entirely unlike that of any other Hymenopteron, in fact I cannot be positive of the sex of the specimens. There is some similarity, however, to the ovipositor of Proctotrypes and this taken together with the absence of any indication of articulated lamellae or claspers leads me to believe that the insects are females, although the slender antennae and legs are more like those of males, especially in the family Bethylidae. So far as I am aware, the trochanters of all Braconidae are two-jointed, a character which appears to be of great importance and to extend through the related families. Except for this character and the presence of a quite distinct subcostal cell, the present insect could be regarded as a Braconid without causing any serious confusion in our present system of classification.