Lloyd Davis collected this species from a cemetery in Salineno, TX. The nest was in bare sandy clay soil in full sun. There was a pile of insect parts a few cm from the nest entrance.

P. hoplitica is distinguished within the complex, including cavigenis, which it most resembles, by the following combination of traits.

Major: posterior dorsal profile of head markedly concave; occiput partly rugoreticulate; carinulae that originate from around frontal triangle turn outward near the center of the head toward the occipital corners; promesonotum strongly convex, almost semicircular in profile; postpetiolar node in side view wide and broadly rounded, not narrow and abruptly rounded.

Minor: head and sides of pronotum smooth and shining, not densely sculptured and opaque; some of the hairs of the promesonotal dorsal surface clavate. 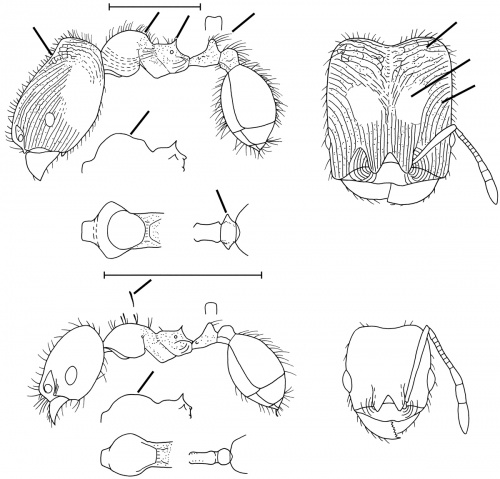 Gr hoplitica, referring to the hoplite, a heavily armed soldier of ancient Greece.