This species utilizes an unusual nest site: rock crevices. Gregg (l953b) found a colony nesting in crevices between a boulder and thin laminae split from its surface, with no contact with the soil. Creighton (l965a) found nests on top of large boulders 4.5 meters high and 6-9 meters across, while G. E. Wheeler and J. N. Wheeler (1973e) encountered them in very narrow horizontal cracks in the almost solid rock walls of Califomia's Deep Canyon. At the last locality, according to Wheeler and Wheeler, "The minors did the foraging, bringing home arthropods or fragments thereof, never seeds. The majors did not leave the nests except to assist minors by carving large pieces of foraged food into smaller bits. But their chief duty appeared to be guard duty: a group of them stood just inside the entrance, where they savagely attacked any object thrust into the nest entrance. The minors, by contrast, were not aggressive, which suggests they are scavengers, not predators." Recent discoveries made by Stefan Cover in Arizona indicate that clydei is a member of a small guild of rock-crevice-inhabiting Pheidole that includes Pheidole portalensis. Several other members of this guild recently found remain undescribed at present. Like these species, P. clydei is only occasionally found in soil or under rocks some distance from rock-crevice habitats. (Wilson 2003)

Mackay and Mackay (2002) - The major and minor have a four segmented antennal club. In the major the scape reaches about 2/3 of the distance to the tops of the posterior lateral lobes, the eyes are large, containing about 80 ommatidia. Nearly the entire head is coarsely sculptured, becoming glossy and shining at the tops of the posterior lateral lobes. The dorsal surface of the promesonotum is rounded, in a single unit, with the promesonotal suture poorly marked. The propodeal spines are slender and elongate. The lateral connules on the postpetiole are very well developed. The dorsum of the gaster is finely punctate, but appearing smooth and glossy.

The antennal club of the minor is similar to that of the major, consisting of 4-segments. The scape is long, extending about 1/3 length past the posterior lateral corner. The propodeal spines are long and slender, being about the same diameter along the entire length.

Mackay and Mackay (2002) - Desert canyons, especially in riparian areas, to the typical cholla-palo verde and agave-ocotillo communities, from 150 meters to 2200 meters in elevation.

Creighton (1964) detailed his findings from four colonies of P. clydei:

The observations were made in late March and early April. At that time the ants were foraging mainly in the period between 9:00 A. M. and 1:00 P. M. The nests were in shade until 8 :30 A. M. but there was a thirty minute period after the sunlight reached them when no foragers emerged. About 1:00 P. M. foragers ceased to emerge from the nest but during the next hour or so many foragers returned to it. Observations made after dark showed nothing that could be regarded as foraging, although minors could be brought out of the nest if the entrance was sufficiently illuminated. It appears that all the foraging is done by the minors. The majors leave the nest only to assist the minors in dealing with some large item of food when this has been brought close to the nest entrance. While the minors obviously follow scent trails they do not forage in columns for the foragers are well separated. Except for one minor, who brought in the withered anther of a flower, all material brought to the nest during the period of observation consisted of arthropods or their disarticulated remains. Much of this was too fragmentary for identification but on several occasions entire arthropods were brought in. There were two dead spiders, two dead majors of Pheidole grallipes, one dead fly, one dead geometrid larva and one living termite nymph. No seeds were ever brought in, although there were a number of plants in the area which had gone to seed. On the basis of these observations it may be concluded that Pheidole clydei is not a harvester but carnivorous. But, like many xerophiles, it appears to be an opportunist where food is concerned. Since the only way to get the ants out of the nest was to bait them out.

The major of clydei has a secondary role in foraging activities. When entire arthropods are brought in by the minors they may be too large to take into the nest without dissection. The majors are very efficient at this for they have powerful mandibles and use them effectively. But their main function seems to be to guard the nest entrance. They stand so close to the nest entrance that it is often possible to see them and they savagely attack any object thrust into the nest entrance. This attack consists of locking the jaws on the intruding object and the major will often hold on so firmly that it can be pulled out of the nest. It appears that a cluster of majors is normally present just inside the nest entrance and it is easy to appreciate why this would make the nest virtually impregnable to any intruder. For, since the walls of the nest are solid rock, the guarding majors cannot be outflanked.

Despite the fact that the minors of clydei occasionally bring in living victims I believe that this species is best regarded as a scavenger. This view is based on the lack of pugnacity in the minor. Experiments with this caste in artificial nests showed that the minor of clydei is slow to attack other insects and equally slow to defend itself when attacked by them. Since I had observed foraging minors of Pheidole clydei entering termite passages it was a surprise to find that when termites were introduced into the artificial nests they usually killed the minors of P. clydei even when the latter outnumbered them. It seems safe to assume that most of the termites or termite remains brought back to the nests of clydei are dead or moribund individuals secured by stealth rather than by predation.

From Wilson (2003): DIAGNOSIS A member of the granulata group (4-segmented club), close to Pheidole grundmanni and distinguished as follows.

Major (no comparison available with grundmanni): hypostoma with only 2 teeth; all of dorsal surface of head longitudinally carinulate; dorsal promesonotal profile in side view smoothly semicircular; petiolar node in side view tapering to a blunt point; postpetiolar node from above conulate.

Minor: propodeal spine needle-like, as long as half the length of the basal propodeal face anterior to it; petiolar node depressed, and petiole as a whole cylindrical; occiput narrow in full-face view, and shallowly concave; the cephalic foveolation is variable, and can occasionally cover the entire upper surface of the head, in which case the carinulae of the head may extend posteriorly between the eye and the antennal insertions; sides of pronotum foveolate and opaque. In habitus and number of hypostomal teeth, this species is evidently a derivative of the pilifera group. 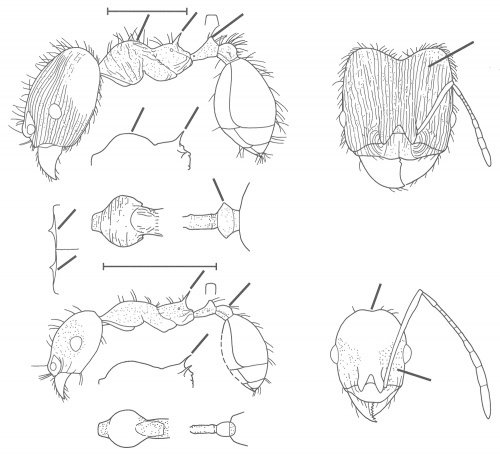