Pheidole absurda excavates deep nests in soil. Colonies are granivorous and store seeds in special chambers. Creighton (1966) studied the habits of this species (as P. ridicula) in south Texas. (Longino 2003)

The Brownsville area of extreme southern Texas south to Costa Rica. I have seen material from the Yucatan Peninsula and Guatemala. Kempf (1972b) reports absurda from the "Guianas," but this needs verification. (Wilson 2003)

Near Campeche I found a nest in moist clay of a thorn forest. Soil nests are also reported by Longino (1997) in Costa Rica and by Creighton (1966) in Texas. According to Creighton, the nest entrance is an inconspicuous hole 2- 5 mm in diameter, leading to a diffuse system of galleries and chambers that descend as much as a meter into the ground. A mature colony contains at least 75 majors and 300 minors. The colonies harvest seeds (Amaranthus palmeri at Creighton's study site) and store them in granary chambers. The minors strip the ovary shards away from the seeds, and the majors crack them open. The majors also serve as very effective guards, using their mandibles like wire clippers to chop off appendages of arthropod intruders. In observation nests they proved more than a match for other Pheidole and the native fire ant Solenopsis geminata. (Wilson 2003)

Creighton (1966) - The foraging responses of ridicula (=absurda) are flexible and this makes them difficult to describe. Much of the foraging occurs at night but it is misleading to characterize ridicula as a nocturnal forager. If the nest area is shaded, or if the day is overcast, foraging may occur over a twenty-four hour period. Even when the nest is not shaded foraging ordinarily continues

Attack posture of a major worker of ridicula (=absurda)

until mid-morning. Foraging may be diffuse or the foragers may form columns. Most of the seeds brought in are picked up from surface litter and in this type of foraging columns rarely form. But when a concentrated food source is at hand, the foragers will converge on it and a column may result. The foragers seldom get far from the nest. In each of the seven colonies most of the foraging was done within ten feet of the nest entrance. The majors take no part in the foraging although they will leave the nest with the minors. When they do so they restrict their patrol to the area around the nest entrance and it is exceptional to find them more than a foot from it. During vigorous foraging there may be several majors outside the nest and their activities effectively clear the area of other ants.

In the encounters which occurred daily around each of the nests, the majors of ridicula rarely got the worst of it. They disposed of the majors of Pheidole floridana, Pheidole metallescens and Pheidole dentata with ease and had little trouble with those of Solenopsis geminata. They would occasionally kill workers of Pogonomyrmex barbatus although this species was more often driven away than killed. There can, however, be no doubt about the high efficiency of the major of ridicula as a guard.

In addition to its activities as a guard the major of ridicula also functions as a seed crusher. When the major opens one of these seeds (Amaranthus palmeri) it picks it up by closing the mandibles on the lateral surfaces of the seed. Increasing pressure on these surfaces ultimately shatters the seed. In the observation nests the majors opened a number of seeds in quick succession.

From Wilson (2003): DIAGNOSIS A large member of the tristis group distinguished by the disproportionately large, elongate head of the major. The major is also characterized by a nearly complete lack of sculpturing on the head and body other than carinulae found on the dorsal surface of the head from the level of the eyes forward; very low meso somal convexity; propodeal spines small and erect. Minor: occiput broad, lacking nuchal collar; body almost completely smooth, lacking any sculpturing except for carinulae on the dorsal head surface at the level of the eye and anterior to it. 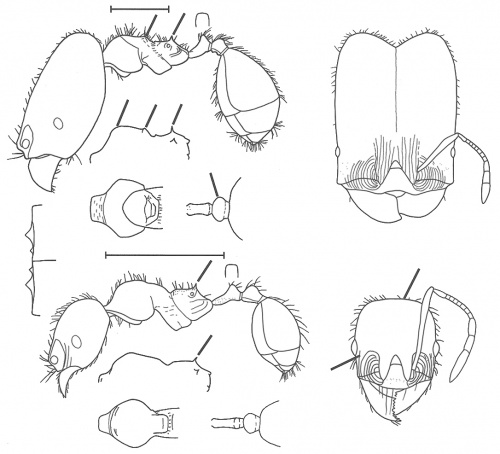