This species normally nests under stones (or logs), but may have a simple nest in the soil, surrounded by a small mound. Brood was found in nests in June to August, sexuals were in nests in July. A dealate female was collected in August. One colony was collected together with Formica fusca, a second with Lasius coloradensis. (Mackay and Mackay 2002)

Since the ranges of many species overlap with M. cyaneum, it is best to use the keys to separate workers which are not associated with queens. The following species are most likely to be collected within the range of M. cyaneum: M. compressum, Monomorium ebeninum, M. ergatogyna, Monomorium marjoriae, M. minimum, and M. wheelerorum. Monomorium cyaneum workers can easily be separated from M. compressum and M. ebeninum workers since the latter two species have a nonpunctate mesopleuron and more than 10 erect to suberect setae projecting from the dorsum of the alitrunk. Monomarium cyaneum workers can be separated from M. ergatogyna workers since the latter species has a more rounded propodeum and occurs mainly along the California coast. Monomerium cyaneum workers can be separated from workers of M. marjoriae, M. minimum, and M. wheelerorum since the latter three species have a nonpunctate mesopleuron and the basal face of the propodeum is longer than the declivitous face.

DuBois (1986) - This species ranges from central Mexico (Mexican Plateau), particularly Hidalgo, Mexico, and Queretaro, east to western Vera Cruz, and west to Nayarit. These localities appear to represent the southern extent of this species. It occurs sporadically northward to southern Texas, New Mexico, and Arizona. In eastern Texas this species is apparently replaced by M. minimum which seems to prefer moister habitats than M. cyaneum. The furthest eastern collections are from the San Antonio Vicinity. The northernmost extensions of M. cyaneum occur in northern Arizona (numerous collections from Grand Canyon Vicinity). This species has been collected as far west as the Hualapai Mountains near Kingman, Arizona. Further west, M. cyaneum is replaced by M. ergatogyna, while further north, M. wheelerorum predominates. It is possible that M. cyaneum may someday be discovered in southern Utah and Nevada since the habitat is not significantly different from that of northern Arizona. It appears that while part of the sporadic distribution of this species is due to lack of collections, habitat restriction also plays a part, Most of the localities collected in Arizona and New Mexico represent upland areas (usually canyons within mountain ranges). Thus many populations may be rather isolated. At the southern extents of the range of M. cyaneum, most collections are from the Mexican Plateau. Although there are two collections from the state of Vera Cruz, both are from upland areas along the Mexican Plateau. Most collections from the plateau were near Mexico City (from such nearby states as Hidalgo and Queretaro). Collections from the western coast of Mexico are spotty. Only one collection has been made on an island (Maria Cleofas Islas, Nayarit). Three collections have been made in the region of Guaymas, Sonora and one collection in the Baja California peninsula (21 km N of La Paz).

This species occurs in essentially all habitats from arid zones to grasslands, sagebrush, pinyon-pine and to wet mid altitude ponderosa pine forests, to urban habitats, it is most common in semiarid habitats. (Mackay and Mackay 2002)

DuBois (1986) - Wheeler (1914b) indicated this species nests under stones in “rather damp places on the sides of canyons.” I have observed this to be the case with colonies of this species I have collected in New Mexico and Arizona. For example, one nest of this species (Arizona: Gila Co.) was located in such a habitat on the south facing slope of a small canyon.

This nest was concealed under a stone measuring approximately 0.1m2. Most of the nest occupied an area about 10 cm in diameter, about 5 cm from the east side of the stone (a populous colony of Forelius pruinosus occupied the western portion under this stone). The portion of the M. cyaneum nest which was visible after the stone was removed consisted of a series of small chambers (1 cm in diameter) connected by tunnels (3 mm in diameter and 0.5-2 cm in length). The topmost layer of chambers was broken open when the stone was lifted. Most brood was near the surface, with different life stages clustered in separate chambers. Although this nest could only be excavated to a depth of about 7.5-10 cm due to large buried stones, I believe I collected the majority of individuals.

Colonies of M. cyaneum have multiple queens, although it is not known whether they are all functional. However, in nests I excavated, each queen was in a separate chamber and surrounded by eggs and first or second instar larvae.

Dates on which sexual forms are released are unknown, although the Gila County (Arizona) colony contained many callow queens and developing male pupae on June 12, 1979.

Monomorium cyaneum has a moderately wide altitudinal range (from 1387 m through 2286 m elevation in Arizona and from 134-1 m through 274-3 m (type locality) elevation in Mexico). 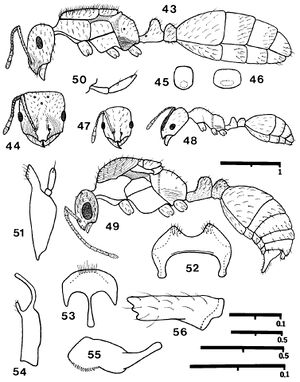 Differing from the worker of the typical form in coloration, the body being deep, metallic blue; the antennae and legs black, with the bases of the funiculi, mandibles, mouthparts, tarsi and articulations of the legs piceous.

Apterous, but with the thorax shaped very much as in the typical minimum though distinctly smaller and more slender. Head more shining above. Body and legs black, the latter with yellow articulations and tarsi.