Brandão et al. (1999) - One of the preserved workers is carrying a larva in between the mandibles, holding it in a fashion similar to that employed by army ants. The MCZ collection has a series of up to forty larvae, all with similar size, and possibly similar age, suggesting a synchronized production of immatures (another character possibly related to a legionary life style). This is the species mentioned by Bolton (1990a) as undescribed. 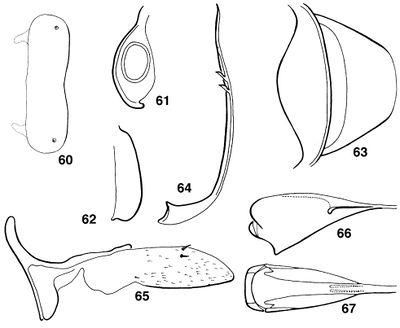 Leptanilloides legionaria sp.n. has the largest body size of all Leptanilloides, and the postpetiole much reduced in size, very much lower dorsoventrally than the fourth abdominal segment. Other relevant characters include: the sides of head rounded in full-face view; head sculpture relatively not so coarse, at most 10–12 shallow foveolae covering a straight transverse line at head midlength; flange over the metapleural gland opening rounded posteriorly; petiolar ventral process subrectangular, with marked anterior and posterior angles. In relation to the venom apparatus, the anterior margin of the spiracular plate is convex (Fig. 63); the quadrate plate body is apparently absent (the anterodorsal corner was lost during preparation); the anal plate (Fig. 63) base is wider than long, weakly sclerotized at apex and bears 6–8 superficial sensillae at the lateral sides of the margin; the oblong plate is weakly sclerotized, with plate limits not well marked (Fig. 65), ventral arm developed; fulcral arm is relatively small; the gonostylus has 70–80 sensillae of similar size; the furcula is bar-shaped (Fig. 67), with a continuous width and is weakly sclerotized throughout, except its lateral apex, lateral arms are absent; the sting shaft is pointed and weakly sclerotized, the basal ridge is not visible, probably fused with the furcula, the anterolateral process is short, anterior to the articular process and the articular process at the basal region of the sting bulb is also short.

Legionaria, a noun in apposition, meaning belonging to a legion in Latin, referring to the fact that one of the worker paratypes was preserved while holding a larva in the fashion usually adopted by army ants.