Described from a small series of workers, taken with callows, but without sexual or immature phases, from beneath a deeply embedded stone,near a stream. (Mann 1923)

Length 1.80-2 mm. Head subquadrate, very slightly narrowed behind, more than twice as long as broad, sides nearly straight and parallel; occipital corners rounded, border feebly concave. Mandibles slender; their blades edentate. Anterior border of clypeus straight. Antennm stout, scapes clavate, extending about three-eighths the distance to occipital borders;first funicular joint rounded, broader and longer than the second; joints 2-10 slightly transverse, gradually increasing in size toward apex; terminal joint about as long as the two preceding together. Thorax and epinotum elongate, slender, flat above; pronotum from above broadest at humeri, with sides feebly convex; mesoepinotum seen from above, quadrate, two and a half times as long as broad, with nearly straight sides; epinotal declivity very short and rounding into the basal portion. Petiolar node from above a little longer and two-thirds as broad as the post petiole, very slightly narrowed from front to rear and with straight sides; in profile slightly convex above, the ventral outline convex at anterior half and concave behind, projected anteriorly as a blunt cone. Postpetiole in profile rather strongly convex beneath, feebly above; from above a little longer than broad, feebly broadened from front to rear, with straight anterior and posterior borders and nearly straight sides. First gastric segment a little longer than the second or third. Legs long, the femora swollen and the tibiea enlarged apically.

Shining; head with abundant, separated, coarse, punctures; thorax and abdomen, with much finer and sparser punctures. Head, body and appendges with abundant, rather coarse, short and erect, brownish hairs. 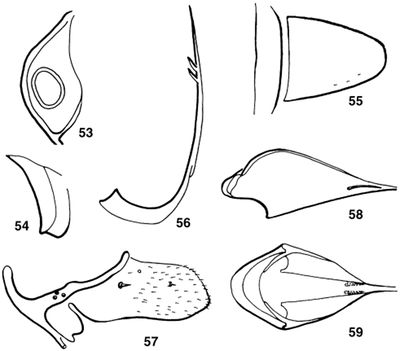 The combination of the following characters distinguishes L. biconstricta from all other species in the genus: postpetiole in profile nearly as deep dorsoventrally as first gastral segment, head sculpture fine with c. 15 shallow foveolae covering a transverse straight line at head midlength, and the flange over the metapleural gland opening sharply pointed posteriorly. Other relevant characters include: petiole is longer than the postpetiole and the ventral process of the petiole does not have a posterior angle. In relation to the venom apparatus, the spiracular plate median connection anterior margin is straight (Fig. 55); the quadrate plate antero-dorsal corner bears a long projection and has the apex acute; the anal plate is longer than wide and weakly sclerotized with 6 sensillae; the oblong plate (Fig. 57) has the postincision directed towards the dorsal margin, although it does not touch it and the ventral arm of the apodema is reduced; the fulcral arm is relatively small and in the shape of a rounded tubercle; the gonostylus presents approximately 80 small sensillae; the furcula is convex, with long lateral arms; the sting bulb base is rounded (Fig. 59), with the basal ridge slightly larger than the width of the furcula, the anterolateral process long and anterior to the articular process and the short articular process in the basal region of the sting bulb.

W. M. Mann travelled along the Beni River in Bolivia as a member of the Mulford Biological Expedition, between 1921 and 1922. Other ant species collected at the type locality of Leptanilloides biconstricta (Tumupasa), deposited at the MZUSP (Megalomyrmex balzani, see Brandao, 1990) bear a label saying ‘Dec.’, so the date of the collection may be December of 1921.