Lattke (2004) - G. pertusa may be confused with Gnamptogenys lacunosa because of the angular anterior clypeal lamella margin and with Gnamptogenys polytreta because of the prominent occipital lamella. Gnamptogenys rugodens also has these same traits, but the deep mandibular rugosities easily distinguish G. rugodens. G. lacunosa has more deeply strigulose sculpturing on the mandibular base than G. pertusa, and the mandibular base in G. lacunosa is not as bulging and convex as in G. pertusa. The dorsal margin of the petiolar node in G. lacunosa is more evenly convex, and the subpetiolar process is shaped as a rounded lobe; the postpetiolar tergite is mostly smooth in lateral view with punctae present on the anterior third or less. G. polytreta has a convex mandibular base but not as bulging as in G. pertusa, the subpetiolar process is triangular with a blunt posterior angle, and the dorsal margin of the petiolar node is more evenly convex. The node in G. pertusa has a sharper anterior curvature.

Not much is known about the the biology of Gnamptogenys pertusa. We can speculate that the biology of this species is similar to other species of the genus. Gnamptogenys are predatory ponerine ants that inhabit tropical and subtropical mesic forests. Nesting is typically at ground level in rotten wood or leaf litter. Some exceptions include species that are arboreal, a dry forest species and species that nests in sandy savannahs. Colony size tends to be, at most, in the hundreds. Queens are the reproductives in most species. Worker reproduction is known from a few species in Southeastern Asia. Generalist predation is the primary foraging/dietary strategy. Specialization on specific groups (millipedes, beetles, other ants) has developed in a few species.

Queen and male are unknown. 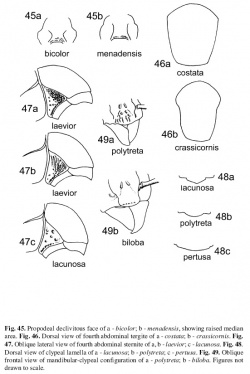 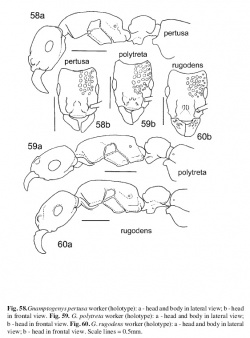 The species name is derived from the Latin adjective for “perforated,” pertusus, and alludes to the depressions of its foveolate sculpturing.