Gnamptogenys lineolata is known from two Dominican Republic provinces. Bill Brown (1993) provided these details about the type material: "1100 m, broad-leaf valley forest with some pine, 2 workers under large stone in soil, plus 5 workers taken from berlesates of leaf litter; 2 foraging workers from roadside quebrada (ravine) at about 1000 m in degraded forest remnant." Additional collections are from a range of forest types. This along with nesting details (located under rocks, in downed wood and under an epiphyte) suggest this species prefers mesophilic sites and opportunistically nests in and under objects.

This interesting species from central Hispaniola differs from the five previously described (endemic) Gnamptogenys from the island, two of them fossil in amber, by its combination of triangular mandibles, fairly large eyes, size, form of petiole, and fine, regular, costulate sculpture. G. lineolata seems to be a rather primitive species among both the Hispaniolan and the overall New World congeners. In Lattke (1993), G. lineolata would apparently fall into his rastrata group, and in his key it runs to couplet 54, where it agrees with rastrata in that the scape surpasses the vertexal margin by its apical width, but differs from rastrata in its larger size, finer sculpture, dentate mandibles, and quadrate head shape, among other things.

Not much is known about the the biology of Gnamptogenys lineolata. We can speculate that the biology of this species is similar to other species of the genus. Gnamptogenys are predatory ponerine ants that inhabit tropical and subtropical mesic forests. Nesting is typically at ground level in rotten wood or leaf litter. Some exceptions include species that are arboreal, a dry forest species and species that nests in sandy savannahs. Colony size tends to be, at most, in the hundreds. Queens are the reproductives in most species. Worker reproduction is known from a few species in Southeastern Asia. Generalist predation is the primary foraging/dietary strategy. Specialization on specific groups (millipedes, beetles, other ants) has developed in a few species. 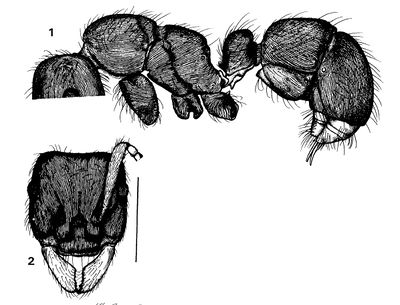 A medium-small species (head width about 1.2, WL near 1.6 mm) with sides of head subparallel and feebly convex; eyes gently convex, EL almost one-fifth HL, situated distinctly behind mid-HL; vertexal margin weakly concave. Mandibles triangular, basal margin oblique, meeting the apical margin at an obtuse angle with a tooth, one of a short series of spaced, uneven, low teeth on the apical margin; blades striate to near apex. Apron of free clypeal margin straight, with rounded lateral corners; a narrow triangular space is left between the margin and the basal mandibular margins at full closure. Antennal scapes surpassing vertexal margin by about their apical thickness in fullface view; scapes smooth and shining, with spaced punctulae. Promesonotal suture arcuate, impressed, but not breaking the integumental surface; metanotal groove broad, impressed, so that the side-view dorsal outline of the alitrunk is gently convex at the promesonotum, and slightly lower and more feebly convex over the propodeal dorsum; declivity of propodeum rounding into dorsum, with a low, obtuse suggestion of a propodeal tooth barely perceptible on each side above mid-height; propodeal spiracle slightly raised, its round opening directed caudolaterad, placed very near the declivity near mid-height. Petiole thick but raised, node back-tilted, apex strongly rounded and highest caudad, broader than long; subpetiolar process triangular, with acute apex directed forward. Prora trailing a prominent carina caudad; constriction between A3 and A4 distinct, but moderate; T4 arched, so that $4 is moderately reduced, and the apical segments of the gaster are directed ventrad and slightly anteriad. Sculpture moderately shining, consisting mostly of very fine, regular, longitudinal striation over dorsal surfaces of head, alitrunk and gaster, arched over petiolar node, about 30-33 costulae between frontal carinae. Color brownish black to yellowish brown, the lighter examples often infuscate dorsad; appendages brown to yellowish.

further description: Although the sides of the head are approximately parallel in full-face view, the anterior part is actually very slightly wider at about halfway between the eye and the anterior corner of the head; vertexal outline, while weakly concave mesad, is filled in by the convex outline of the nuchal rim behind it. The frontal lobes are moderately expanded, but do not cover all of the antennal insertions. The comb of stiff hairs in the basitarsal concavity opposing the strigil of the fore leg lacks a longer, specialized, stiff seta present in some other Gnamptogenys species.