Not much is known about the the biology of Gnamptogenys chapmani. We can speculate that the biology of this species is similar to other species of the genus. Gnamptogenys are predatory ponerine ants that inhabit tropical and subtropical mesic forests. Nesting is typically at ground level in rotten wood or leaf litter. Some exceptions include species that are arboreal, a dry forest species and species that nests in sandy savannahs. Colony size tends to be, at most, in the hundreds. Queens are the reproductives in most species. Worker reproduction is known from a few species in Southeastern Asia. Generalist predation is the primary foraging/dietary strategy. Specialization on specific groups (millipedes, beetles, other ants) has developed in a few species.

Lattke (2004) - Brown (1958) described Gnamptogenys chapmani from specimens gathered in different localities. A study of the type material revealed that the worker and female taken on 27 April 1924 represent a different species (Gnamptogenys leiolabia) from the series of workers taken on 19 March 1924, which include the holotype of G. chapmani. Additional specimens mentioned by Brown (1958) from Romblon Island, Philippines, were not examined, but his discussion of intraspecific differences corresponds to differences between G. chapmani and G. leiolabia. The following characters described by Brown (1958) as intraspecific variation are actually attributes of G. leiolabia: narrower head (CI 0.70-0.76) and petiole, smaller and sparser foveolae, and the angular propodeal declivity relative to the mesosomal dorsum. Thus, the queen of G. chapmani described in Brown (1958) corresponds to G. leiolabia. The most easily discernible difference between the two species is the median clypeal area; in G. leiolabia it is mostly smooth down to the lamella, which is broadly concave, almost straight. This median area is bounded by two raised longitudinal crests that stretch from next to the anterior edge of each frontal lobe down to the lateral borders of the lamella.

Specimens vary in the degree of foveolate sculpturing, posteromedian clypeal sculpturing, the angle formed by the ventral and anterior pronotal margins in lateral view, the angle formed by the dorsal and declivitous propodeal margins in lateral view, the shape of the subpetiolar process, and size. When two character states were well defined in some specimens other characters always merged into a continuity, making separation arbitrary. 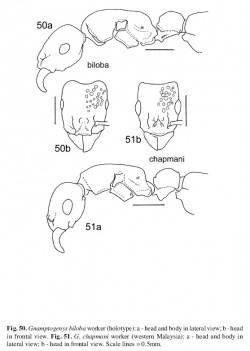