Forelophilus is currently a subgenus of Camponotus. It is a small subgenus with just 3 described species (Camponotus javaensis, Camponotus philippinensis, Camponotus stefanschoedli), and none have been collected in any abundance. Little is known about their biology.

Zettel and Zimmerman (2007) - Within the Philippine ant fauna, workers of Forelophilus can be distinguished from Philippine species of Camponotus by the following combination of characteristics: body blackish, comparatively small (length ca. 3.0-5.5 mm), with erect setae on head, mesosoma, petiole, and gaster and with the appressed pilosity dense only on gaster. Eyes in full face view slightly behind mid-length of head, not entirely behind end of frontal carinae. Antenna relatively short, flagellum distally widened, segments 9-11 slightly shorter than wide. Metanotal furrow deep. Propodeum with transverse ridge separating dorsal and caudal surface; this ridge with some long setae. Fore femur not incrassate.

Kutter (1931) justified the description of the genus Forelophilus briefly: “The interesting new genus is similar to Overbeckia from Singapore regarding shape of antenna, lacking dimorphism, and number of maxillar and labial palp segments. However, the head is not truncate and the unusual formation of the thorax distinguishes Forelophilus from all other related genera.” (originally in German, translated by the authors).

Bolton (2003: 26) commented: “Forelophilus and Overbeckia are both probably synonymous with Camponotus, as that huge and amorphous genus is currently defined. The genus-rank and subgenus-rank taxonomy of the tribe [= Camponotini] is in urgent need of attention. Camponotus has dozens of meaningless subgenera and the subgenera within Polyrhachis, despite recent work, refuse to make sense.”

Regarding the characteristics used by Kutter (1931) to establish Forelophilus, it should be noted: 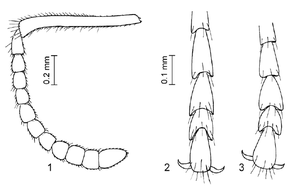 (1) The shape of the antenna (Fig. 1), especially the short, sub-quadrate flagellum segments, are extremely similar in Forelophilus and Overbeckia and distinguish both genera from Camponotus . This characteristic can be well recognized in worker morphs and gynes of various Forelophilus species, including undescribed ones illustrated on the Web.

(2) There is a worker polymorphism in Forelophilus. It is interesting to note that Kutter (1931) proposed the lack of a dimorphism from his knowledge of three workers only.

(3) The palp formula 6,4 can be found in all Camponotini except Camponotus megalonyx Wheeler (Bolton 2003).

(4) The head of Forelophilus is not as truncate as in Overbeckia, but roundish in minor workers and squared and subtruncate in the major workers.

(5) The dorsal outline of the mesosoma of the workers, with deep metanotal furrow, metathoracic spiracular tubercles, and transverse ridge on propodeum, seems to be a very valuable characteristic of Forelophilus species, including undescribed ones. However, the most typical component of this feature, the metathoracic spiracular tubercles surpassing the dorsal face of the propodeum (see Bolton 1994), is absent in the major worker (known only in [[Forelophilus stefanschoedli).

A comparison of Forelophilus and species of Camponotus from Southeast Asia, the Pacific islands, and Australia results in the observation that all species have a similar structure of the gaster by having a relatively short first tergite less than half of the gaster length (see definition of Camponotus by Bingham 1903). Characteristics used to distinguish certain clades or species of Camponotus, like number and length of setae on head parts and dorsum of mesosoma, and density, length, and angle of elevation of setae on scape and tibiae, do not significantly differ between Forelophilus and Camponotus. Strong similarities can be observed between Forelophilus and Camponotus subgenus Colobopsis: both groups have wide frontal areas (maximum width between carinae more than one-third of head width) and raised metathoracic spiracles are also present in some Colobopsis spp. (A. McArthur, personal communication). However, the truncation of the clypeus is strong in Colobopsis (especially in major workers) and weak in Forelophilus, and the fore femur of Forelophilus is not incrassate as in Colobopsis.

The structure of the antenna supports a close relationship of Forelophilus and Overbeckia, and the structures of the mesosoma support the monophyly of Forelophilus. Whether this complex belongs to Camponotus s.l. or not, can be judged only after a thorough systematic and molecular study on this, the largest ant genus.

Petiole nodiform, much higher than long in profile, dorsally evenly rounded and with some long setae; node, if seen from front or rear, subovate.