In Columbia this species can be quite common in disturbed areas.

Three species of Dorymyrmex (Dorymyrmex bituber, Dorymyrmex pulchellus, and Dorymyrmex tuberosus) share a few characters with D. biconis. This is a group of species easy to recognize by the presence of two well-developed mesosomal tubercles: one in the last part of the metanotum and the other one between the dorsal and declivitous faces of propodeum.

North and central South America, from Venezuela to Peru.

In Colombia, Dorymyrmex biconis is spread throughout, from sea level to more than 2300m. It is more common in lowlands (i.e., Colombian Caribbean region, North of Colombia) and quite common in anthropic environments, with higher abundance in urban places. Nevertheless, workers of D. biconis have been collected in primary dry forests and in mangroves. D. biconis builds nests in soil devoid of vegetation, in very warm areas. Exceptions are arid but extremely cold places such as Boyaca, Colombia. As in other species of Dorymyrmex, nests are superficial, with simple architecture, and no more than 10–15 cm in depth. Excavated nests by RJG in Santa Marta (Magdalena, Colombia) share a similar architecture: only one circular entrance (no more than 5 mm in diameter) surrounded by a mound of sand or other soil particles with a diameter of 9-10 cm. The nest consist of one chamber with queens and males, a second one with larvae and worker pupae, and a third chamber with food and insects remains, such as several Bruchidae (Coleoptera). In one nest, RJG collected some dead Thysanoptera in the food storage camera. One nest of D. biconis can keep between 10 to 15 alate queens, 8 to 10 males and several tens of workers. Sometimes there are no more than 100 to 200 workers in a single nest. No dealate queens have been found in explored nests. Colonies of D. biconis are probably polydomous, and queens may fly outside of its colony to build satellite nests. In some cases, RJG has found two or three nests in an area of 10m2; only one of these nests had queens. (Cuezzo and Guerrero 2011)

Concolorous reddish brown, whitish pubescence covering all body tagma. Some specimens have some segments of gaster darker than rest of the body. Worker length 2.8–3.0 mm. Head: subquadrate, longer than wide, with lateral sides straight to slightly convex, posterior margin of the head straight to slightly convex. Scape surpassing the posterior margin of head by no more than 1/3 of its length. Compound eyes placed far from posterior clypeal margin but in the first half of the head. Psammophore with short hairs disposed in a triangle; the hairs in the top line are near to the foramen magnum and do not reach the oral cavity. Mesosoma: mesonotum with a stout cone, rounded apically, and shorter than propodeal tubercle. Mesonotal tubercle directed posteriorly. Metanotal suture well developed and located inside a very pronounced concavity posterior to mesonotal tubercle. Dorsal face of propodeum anterior to tubercle sinuate. Metasoma: petiolar scale directed dorsally. 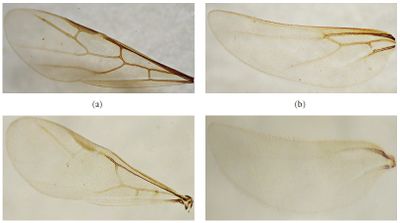 Cuezzo and Guerrero (2011) - The name of this species refers to the main diagnostic character of D. biconis: the presence of a pair of tubercles interrupting the mesosomal profile.