Known only from a small number of workers, nothing is known about the biology of Cephalotes flavigaster

A member of the hamulus clade characterised by a completely orange first gastral tergite and by sparse pilosity. (de Andrade and Baroni Urbani 1999)

Mesosoma robust, convex in side view. Scapular angles bearing a small denticle, more developed in the paratypes than in the holotype. Pronotal border anteriorly marked by a carina more impressed in the holotype than in the remaining specimens, slightly smaller. Humeral angles bearing each an obtuse spine directed anteriorly. Pronotal sides straight, ending posteriorly in a small, round tooth visible in dorsal view. Promesonotal suture impressed. Mesonotal teeth either rounded and poorly developed (holotype), or absent, or small and pointed. Propodeal suture deeply impressed dorsally. Propodeum ca. 114 narrower than mesonotum, with differentiate basal and declivous faces. Basal face slightly more than 113 broader than long, with a small denticle anteriorly, straightening posteriorly; declivous face as long as the basal face, with slightly converging sides posteriorly. Propodeal spines as long as (holotype) or slightly shorter than the basal face of the propodeum, thick in most specimens, diverging.

Petiole more than 1/3 broader than long, its anterior face truncated and marginate dorsally by a crenulate carina shortly interrupted in the middle; its sides converging posteriorly and bearing a small spine anteriorly, absent in one paratype, and a pointed tooth medially. Postpetiole more than 1/2 broader than longer; postpetiolar spines broad and rounded (holotype) or pointed (paratypes), inserted anteriorly and curved backwards.

Legs as in Cephalotes argentiventris.

Legs as in argentiventris.

Pilosity. As in argentiventris except for the first gastral tergite which bears thin, sparse hairs. 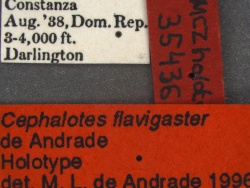 de Andrade and Baroni Urbani (1999) - from the Latin flavus (= reddish-yellow) and gaster (= abdomen), referred to the distinctive coloration of this species.