Aphaenogaster gamagumayaa is one of only two troglobiotic (true cave-dwelling) ant species, the other being Leptogenys khammouanensis from Laos. The type series of Aphaenogaster gamagumayaa is based on workers probably from a single nest, collected in a limestone cave on the island of Okinawa, Ryukyu Archipelago, Japan. All specimens were found in a guano hall, an area of approximately 25 m2 (2–3m in height), approximately 20m from the cave entrance. This species has only been found in a cave area with heavy guano deposits, and some worker ants were observed carrying guano.

Naka & Maruyama (2018) - Distinguished from the other East Asian species by having the most elongate body, the longest antennae and legs, and the most reduced eyes. Among the Japanese species, it is most similar to Aphaenogaster irrigua from the Ryukyu Archipelago. It differs from A. irrigua in lighter color, smaller eyes (EL 0.19 x TmL vs. 0.38 x TmL), basal margin of mandible with weaker serration, and scapes more elongate and slim (SL 2.28 x HW vs. 1.53 x HW). 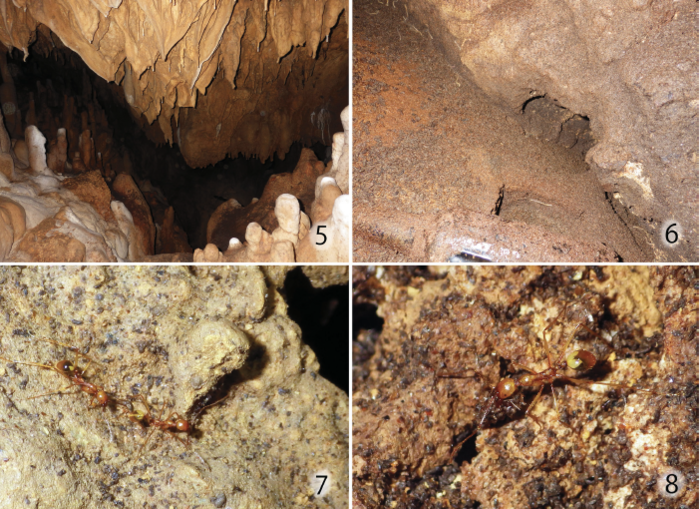 The type series of Aphaenogaster gamagumayaa is based on workers probably from a single nest, collected in a limestone cave on the island of Okinawa. All specimens were found in a guano hall (Fig. 5), an area of approximately 25 m (2–3 m in height), approximately 20 m from the cave entrance. The hall is completely dark, and during the study period (August to October 2017), it was consistently cooler (< 25°C during the day) than the exterior of the cave (28–32°C). The cave contains no pools or streams but is generally wet, and the substrate is clay soil.

The ants were moving around an approximately 4-m2 area in which there were many small holes (Fig. 6) and cracks in the cave floor. Ants were observed entering these holes. Although one of the authors, TN, did not dig into the holes, they were surmised to be associated with a core part of the nest. TN observed a maximum of 12 individual workers, most likely nest mates; no aggression was seen between them. Most of them were solitary foragers and observed on the cave floor or on the lower part of the cave wall. However, on one occasion two ants were observed walking together (Fig. 7) for some time. On two occasions ants were seen carrying balls of guano into a hole (Fig. 8). Another individual was observed carrying a small white object that did not appear to be guano. Upon perceiving human movement, the ants stopped moving and hid. While motionless, they waved their antennae, most likely to assess the situation. Gaster bending behavior, which is often observed in other Aphaenogaster species (Terayama et al. 2014), has not been observed in A. gamagumayaa.

There are four pieces of morphological and circumstantial evidence to support our view that Aphaenogaster gamagumayaa is a troglobiotic species: 1) this species has only been found inside a cave; 2) it has several characteristics that are unique to cave insects; 3) ants were concentrated in an area of the cave with a high abundance of guano; 4) this cave is located on Okinawa, which harbors many endemic troglobiotic species.

1) The first specimens of A. gamagumayaa were found in a cave situated in a small evergreen forest in Okinawa. TN performed six searches of the area outside the cave (three during the day and three at night; 24 h in total). These searches were focused especially on the forest floor, crevices in and under rocks, and an old cemetery, all of which are generally suitable habitats for Aphaenogaster species. Also several other Okinawa forests were surveyed on multiple occasions to confirm the presence/absence of A. gamagumayaa. However, no A. gamagumayaa specimens were found in any of these searches. The ant fauna of Japan, including Okinawa, has been well investigated (e.g., Japanese Ant Database Group 2008), and A. gamagumayaa is a large and conspicuous species. It seems likely that if its habitat is not restricted to cave interiors, it would have been discovered prior to this study.

2) In general, Aphaenogaster ants are slender, with elongated bodies, antennae and legs. The body of A. gamagumayaa is especially slender and is characterized by extremely elongated antennae and legs. It also has reduced eyes, and a less pigmented body than other Aphaenogaster species. Loss of wings, reduction of eyes, elongation of antennae and legs, and loss of pigmentation are commonly observed in troglobiotic arthropods (Vandel 1964, Christiansen 1965, Culver 1982, Marques & Gnaspini 2001; Juan et al 2010). It is unclear whether A. gamagumayaa displays any wing loss/reduction in the queen and male, as during the course of the study only workers were found. However, its other characteristics are typical of troglobiotic arthropods. The only previously known troglobiotic ant, L. khammouanensis, shares similar characteristics (Roncin & Deharveng 2003).

3) Cave environments are generally nutritionally poor. The unique morphologies and life histories of many troglobiotic arthropods can be explained as adaptations to this oligotrophic habitat (Deharveng & Bedos 2000). Leptogenys khammouanensis is regarded as a troglobiotic species because of its habitat in the deep parts of caves, and of the typical morphology of troglobiotic arthropods. However, as Wilson (1962) stated, caves do not usually provide suitable habitats for ants because of the difficulty of sustaining a colony in such an oligotrophic environment. This difficulty has led to a paucity of troglobiotic species among ants. Although caves are generally characterized by an oligotrophic environment, areas with high densities of guano deposits (so-called guano halls) are an important exception. Guano deposits represent an important source of nutrients derived from the outside environment and are carried into the cave by cave-dwelling bats. Aphaenogaster gamagumayaa was found only in a part of a cave where guano is deposited by two bat species (Rhinolophus pumilus Andersen, 1905 and Miniopterus fuscus Bonhote, 1902). TN observed workers entering and leaving small holes or crevices in rocks on the cave wall and floor; some of them were carrying small balls of guano. They apparently nested under the cave floor and may have adapted to feed on guano (Leptogenys khammouanensis), which was not found in guano halls, may possess different adaptations to cave habitats).

4) Okinawa, the type locality of A. gamagumayaa, is located in a subtropical region of the Ryukyu Archipelago. Much of the land on Okinawa and its neighboring islands is formed from uplifted coral reef (Machida et al 2001), and limestone caves are common in the region. These caves harbor many endemic Okinawan troglobiotic or troglophilous animals (Machida et al 2001), such as the bat R. perditus Andersen, 1918, the shrimp Macrobrachium miyakoense Komai & Fujita, 2005, the crab Orcovita miruku Naruse & Tamura, 2006 and the millipede Epanerchodus subterraneus Verhoeff, 1938. The cave-dwelling spider Coelotes troglocaecus Shimojana & Nishihira, 2000 and several species of assimineid snails are found only on Okinawa (Maeda et al. 2017). Okinawa may harbor many more troglobiotic species that have yet to be identified. Fifteen species of Aphaenogaster ants have been identified in the Ryukyu Archipelago (Terayama et al. 2014). Many of these are endemic to one or a few islands and have obviously speciated by island or small island chain. This suggests that Aphaenogaster ants may have a low migratory ability and are relatively prone to allopatric speciation. Some Aphaenogaster species (for example A. irrigua) prefer dark, wet habitats such as the area around mountain streams. Aphaenogaster gamagumayaa evolved as a troglobiotic ant on Okinawa (and possibly its adjacent islands) as a result of various factors, namely the geologic features of the region, traits of the taxon, basic habitat features of Aphaenogaster ants and presence of guano in the cave.

The specific epithet is a Ryukyuan dialect “gamagumayaa” (= cave-dwelling hermit), referring to the habitat of the new species.