The only specimens of Anomalomyrma boltoni, two workers, were "sifted from the trunk of a dead tree at a late stage of decomposition, very close to a stream and extracted using Winkler apparatus. The sifted material was wet." (Borowiec et al. 2011).

From Borowiec et al. (2011): The general appearance of Anomalomyrma boltoni is similar to that of Anomalomyrma helenae, but they are distinguishable by the following characters:

Known only from the two type workers.

Known only from (type) workers. 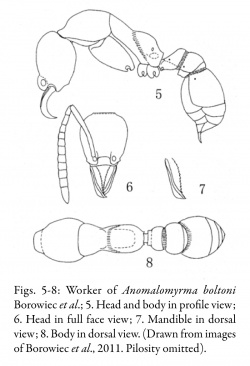 Tergosternal fusion of abdominal segment III was not determined through dissections due to scarcity of material. The suture runs the length of the segment. Abdominal segments III and IV with deep girdling constrictions between pre- and postsclerites. Abdominal segments IV–VII (gaster) oval in dorsal view, gastral shoulders not surrounding abdominal segment III, and no notch between tergite and sternite IV in lateral view. Mandibles smooth with small punctures (ca. 0.01 mm). Head with similar punctation and strip of irregular roughness of cuticle in middle of frons, posterior portion of head capsule with roughness and small tubercles. Pronotum mostly smooth with scattered small punctures, only pronotal flange and margins with irregular roughness, meso- and metanotum also very irregularly sculptured. Propodeum with the same type of roughness, except sides, where smooth. Body pilosity of suberect to erect hairs on all surfaces. Color orange brown to reddish brown, appendages lighter.