Workers were found (in Karema) running in a very diffuse single file over the top of the ground and under leaf litter in a small, recently made clearing at the edge of virgin lowland rain forest. The time was noon of a sunny day (note that 3 colonies of the closely related Aenictus ceylonicus were found foraging in New Guinea between 9 and 11 in sunny mornings, or, in other words, at nearly the same time and under similar condition). The file was very inconspicuous and could not be traced more than a few feet. The Busu River workers were collected in a soil-litter berlesate from the floor of virgin lowland rain forest, in close company with such distinctive Papuan ant species as Dacetinops cibdelus, Strumigenys mayri, Eurhopalothrix biroi, and Eurhopalothrix brevicornis.

Little is known about the biology of Aenictus exilis. The genus is comprised of species that live an army ant lifestyle. Aenictus typically prey on other ants, from other genera, or other insects such as wasps or termites. There are reports of Aenictus preying on other insects as well and even have been observed collecting honeydew from homopterans (Santschi, 1933; Gotwald, 1995) but this appears, at least from available evidence, to be uncommon. Foraging raids can occur day or night across the ground surface. Occasionally raids are arboreal. During a raid numerous workers attack a single nest or small area, with several workers coordinating their efforts to carry large prey items back to the nest or bivouac. Aenictus have a nomadic life style, alternating between a migratory phase in which nests are temporary bivouacs in sheltered places above the ground and a stationary phase where semi-permanent underground nests are formed. During the nomadic phase bivouacs move regularly, sometimes more than once a day when larvae require large amounts of food. Individual nests usually contain up to several thousand workers, although nest fragments containing only a few hundred workers are often encountered. Queens are highly specialised and look less like workers than in most ant species. They have greatly enlarged gasters (dichthadiform) and remain flightless throughout their life. New colonies are formed by the division of existing colonies (fission) rather than by individual queens starting colonies on their own. 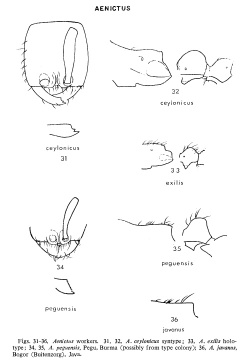 Holotype: HW 0.40 mm, HL 0.48 mm, SL 0.31 mm. Antenna 10-segmented. Very similar to workers from sympatric series of ceylonicus (Mayr), differing chiefly in its smaller size, lighter coloration, and weaker sculpturing. (The name exilis means weak or feeble and refers to these characteristics). Mandibles thin and 4-toothed, as in ceylonicus. Cephalic structure as in ceylonicus. Propodeum angulate. Subpetiolar process large, consisting of a forward-directed lobe surmounted by a thin, acutely angulate flange which is directed straight downward. Pilosity moderately abundant; the length of the longest pronotal hairs only about 0.10 mm.